History of the monument

The Lomagne, a region of Gascony with colourful landscapes and gently rolling hills, was also a feudal entity from the 10th century, and a Viscounty reporting only to the Royal estate in the early 17th century.

Following significant urban development, with the growth of bastide towns and other "villes franches" (free towns) in the 13th and 14th centuries, this region was a border zone during the wars between England and France. This resulted in a large number of "castelnaus", new fortified towns controlled by minor local lords, and the fortification of older buildings in a characteristic form, known as "Châteaux Gascons", or "tours-salles" for the more modest type of castle.

The Château de Gramont is representative of this type of building with its specific architecture: a rectangular design with a great hall on the first floor and towers on either side. The history of the site meant that the initial Gascon château was developed into a vast Renaissance residence, but the medieval structures are still mostly present, such as the square tower and the gateway.

Gramont is mentioned for the first time in the archives of 1215. Simon de Montfort, a warlord from Ile-de-France who led the Royal armies in their crusade against the Albigensian heresy, became master of a large number of Languedoc fiefdoms, and gave the estate of Gramont to a certain Eudes de Montaut. Eudes swore allegiance to the new authority on the very same day and his descendants owned the lands of Gramont until 1491.

The estate of Gramont became a barony and passed to the Voisins family following the marriage of Françoise de Montaut with Guillaume de Voisins. Several alliances, including the marriage of Aymeric de Voisins with a goddaughter of Catherine de Médicis in the 16th century, meant that the Voisins were able to hold onto Gramont until the early 17th century. Through a series of complex successions, the barony then stayed in the distant family until the Revolution.

Following this troubled period, during which one of the owners of the Château ended up on the scaffold, the heirs to the estate were left Gramont at the end of the 19th century. Restored according to the tastes of the time, in a blend of neo-Renaissance and troubadour style, by Mr de La Fontan de Goth in around 1880, Gramont had several negligent owners in the 1900s who allowed the Château to run to ruin until it was acquired in 1961 by Mr and Mrs Roger Dichamps.

Following an initial restoration project, this couple from Auvergne settled at Gramont to save the castle of the Montauts from ruin. A huge project to clear the ruins and consolidate the stonework took place, followed by conversion of the interior areas. Furniture and art objects from the 16th, 17th and 18th centuries have been added to the residence, which is complemented by elegant gardens in a Renaissance style. The work was completed with immense passion and a profound sense of altruism, and the Château was donated to the Caisse des Monuments Historiques et des Sites in 1979. 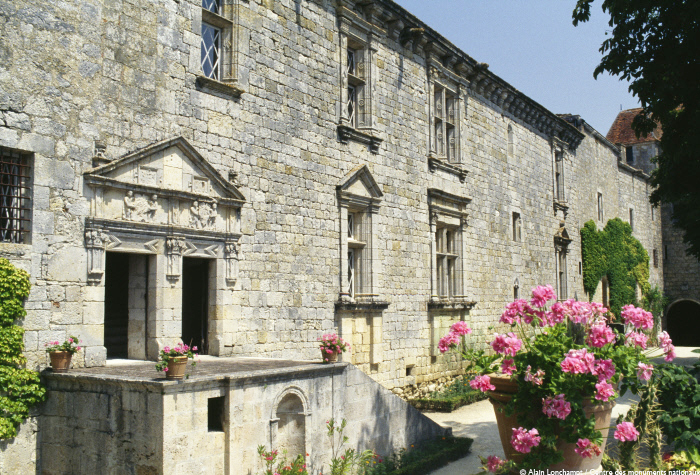 Presentation of the monument

Located on a ridge overlooking the valley of Arratz, with a small river marking the natural boundary between the Toulouse region and that of Condom, the Château de Gramont is therefore representative of two very different architectural styles.

The South-eastern tower, known as the Simon de Montfort tower, is the main survivor from the medieval period. Considerably modified and without its crown, it still retains defensive elements from the 14th century such as a bretèche, and could be a part of the château given to Eudes de Montaut in the early 13th century. The building adjoining it, in the characteristic Gascon château form, has also undergone considerable changes.

In the 19th century, its façades were adorned with lookout turrets and large mullioned windows decorated with heraldic stained glass, with arrow slits above them. The 17th century gateway, with its bossage, conceals the former medieval entrance that was part of its defensive system. It gives quite a majestic look to the entrance, with its broken pediment bearing the arms of the Montant family. To the South-west, the main building, at a right angle, still retains some medieval features, such as an elegant trefoil window on the ground floor, leading into the building work carried out between 1530 and 1545.

The use of Renaissance architectural designs for the new building can be seen in the arrangement of the façades, punctuated on two floors by large casement windows alternating with narrower, single-mullion windows, topped by a moulded entablature or a triangular pediment. A cornice, consisting of projecting corbels, punctuated by some highly Gothic gargoyles, runs under the gently sloping roof, which is almost totally concealed from the eyes of the visitor. The sculpted decor includes a large number of pilasters with Ionic or Corinthian capitals, fluted columns and geometric motifs (diamonds, circles). The North façade in particular, which has two projecting pavilions, displays even more figurative decoration, with cherubs' heads, and figures carved in the round, in medallions.

Particular attention has been paid to the composition of the entrance door on the courtyard side, opening into the main staircase. Under a high triangular pediment, two doors lead up to the first landing. Each is topped with a lintel decorated with half-diamonds and pilasters supporting composite capitals. The entablature and single pediment create a unity that is accentuated by the symmetrical decoration above each opening: naked figures bearing a coat of arms and scrolls in the form of antique tabulae.

The main staircase is an astonishing compromise between Gothic tradition and modernity: the halfpace staircase widely used in the mid-16th century is covered here by a moulded ogival vault, the drop of which is either anchored in the adjoining wall or supported by a base with Renaissance motifs. Considerable modifications to the interior areas do not make it very easy to picture their original layout, although the great hall on the first floor is the same size as it was in the 16th century.

By pursuing your navigation(browsing) on this site, you accept the use of cookies.